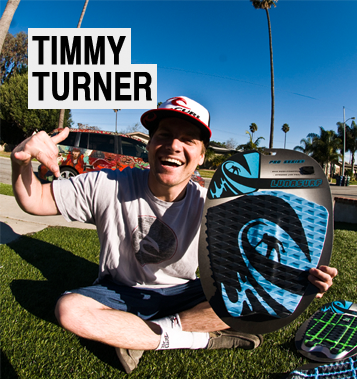 Born and raised in Huntington Beach California, Timmy Turner is a standout surfer, talented movie maker and has become one of the city’s most famous sons. Revered for his award-winning film, ‘Second Thoughts’ which won the ‘2004 Surfer Poll Movie of the Year’, Timmy plans to continue his lifelong quest to find waves of absolute perfection, while documenting his adventures.

Through his high school years he excelled in the ocean becoming captain of the Huntington Beach High School surf team, winning contests and following a standard path towards becoming a pro surfer. But this standard route took a turn when he started using his dad’s camcorder to film himself and friends.

Timmy was soon travelling, most notably to Indonesia, and making movies himself. It was here along with friends Brett Scwartz and Travis Potter that he filmed the now legendary ‘Second Thoughts’. The film broke new ground in its style and the incredible POV camera work to great acclaim. Then in response to the Boxing Day tsunami in 2004, massacring 275,000 individuals and injuring untold numbers of others, he flew out to Indonesia to mount his own relief expedition. Filming along the way for a documentary ‘The Tsunami Diaries’, with his mum, cinematographer Dustin Humphrey and a group of surfers, . A project he did from the heart to try and give back to the people of Indonesia. Soon after this though Timmy would be fighting for his own life.

A staph infection caught surfing back home in California in 2005, meant Timmy lost over half of his skull, spent weeks in a coma and at one point was unlikely to survive. He did though against all the odds. “Basically, he was an experiment,” Jessica (Timmy’s wife) says now. “It was like, ‘Let’s try this. OK, now let’s try this.’ And the whole time I didn’t know if he was going to be a vegetable, or if I would be taking care of someone who couldn’t understand me or speak to me. It was very heavy.”
Having made a full recovery, and under doctor’s recommendations that “he shouldn’t go back to the tropics for a while at all costs, to avoid the heightened risk of further infection.” The result was?

Timmy is now into filming his new movie, ‘Cold Thoughts’, which focuses on perfection of the coldest order. With trips to Iceland, Canada, South America, New York in the dead of winter, as well as other extreme locales in the bank, look for Timmy to push the limits. He’s learned to travel with trucks full of survival gear, constantly recalibrate plans due to subtle weather changes that can turn perfect swells into impassable seas, and prepare for worst-case scenarios that include grizzly bear attacks. Despite the lengths to which he has gone, he has yet to find the sort of magical wave machine he left behind in Indonesia. This, of course, doesn’t bother him in the slightest, because it will make for a better movie. The film due for release in 2012 is a unique insight into Timmy’s recovery from illness and his constant quest for isolated perfection, pushing the limits to capture some mind blowing footage.

“‘Cold Thoughts’ is all about how I keep surfing, keep trekking on,” he says. “It will be about what the doctors said, what I went through, and how I’m still doing it. I’m overachieving.”

“9,999 people, given the same care, would have died. That he survived is a miracle. That he’s recovered to the point that he’s doing what he’s doing is simply incredible”.

Between trips for ‘Cold Thoughts’ Timmy can be found working in the family run restaurant The Sugar Shack, surfing around HB or at home with his family, and of course he still finds time each year to slip back to the perfect barrels of Indonesia.

No images found!
Try some other hashtag or username

What are you looking for?

We use cookies to ensure that we give you the best experience on our website. If you continue to use this site we will assume that you are happy with it.Ok